In addition to publishing books on cocktails and drink history, Mixellany Limited's Anistatia Miller and Jared Brown also provide a number of specialist services including:

Speaking at trade shows, conferences, and bar shows on a variety of drink-related subjects

Conducting bespoke historical research and archival documentation for the beverage industry covering brand histories, drink histories and many other subjects

With over 25 years of experience in the field, Mixellany Limited works with clients to educate the industry and consumers about the rich history of spirits and mixed drinks to inspire a greater appreciation of quality over quantity consumption and to provide a strong foundation for the creation of new drinks by the the new generation of professional bartenders who are forwarding a true Golden Age of Mixed Drinks around the globe.

For further information about our distinctive services, contact Anistatia Miller at mixellanyltd@googlemail.com

THEY TRACED THE FIRST USE OF THE WORD "COCKTAIL" TO 1798 ON LONDON'S DOWNING STREET. THEY KNOW WHERE THE SAVOY'S HARRY CRADDOCK IS BURIED. THEY DISCOVERED HARRY JOHNSON'S TRUE BIRTHPLACE AND GRAVESITE PLUS KNOW HOW THE BLOODY MARY AND THE RED SNAPPER GOT THEIR NAMES.

The inseparable cocktail couple, Jared Brown and Anistatia Miller, are the directors of Mixellany Limited®, a consultancy and publishing company that specialises in anything and everything to do with spirits and mixed drinks. During the course of their 30-year collaboration, Miller and Brown have written more than 30 books including  Shaken Not Stirred®: A Celebration of the Martini,Champagne Cocktails, Cuban Cocktails, Spirit of the Cane, The Mixellany Guide to Vermouth & Other Aperitifs, and The Deans of Drink.

Their masterwork, the two-volume Spirituous Journey: A History of Drink charted the history of spirits and mixed drinks from 7000 BC to the mid-20th century. (The first volume won a coveted Gourmand World Cookbook Award for Best Drink History in the UK in 2009 and the second received the same honour in 2010.)

Miller and Brown received the 2021 Helen David Lifetime Achievement Award from the Tales of the Cocktail for their contribution to educating the drinks industry. They also received the 2022 CLASS Magazine Outstanding Contribution Award as well as the  2010 Best Drinks Writing Award from CLASS Magazine. And in April 2011, Miller and Brown became the first spirits writers to receive the coveted International Wine & Spirits Competition's Communicator of the Year Award, joining a roster of authorities such as wine experts Anthony Dias Blue and Oz Clark. Last but not least, the couple received the Industry Legends Award at the 2016 IMBIBE Personality of the Year Awards.

Brown was honoured with the receipt of the Gin Grand Guardian Award from the Japan Gin Association. He is also a liveryman of the Worshipful Company of Distillers of London.

Mixellany's publishing division was responsible for the Mixologist series of cocktail journals, the republishing of the rare classics The Café Royal Cocktail Book and El Arte de Hacer un Cocktail y Algo Mas, and titles by other noted authors including Gary Regan, Shawn Soole, Geraldine Coates, Stew Ellington, and Andy Ives. They also contributed over a dozen entries to the 2021 volume The Oxford Companion to Spirits and Cocktails.

They are regular contributors to Imbibe, CLASS, The Cocktail Lovers, BA's Highlife, and The Observer Food Monthly, and Financial Times in the UK. They have written extensively for other publications including Barlife (Czech republic), Wine Spectator, Cigar Aficionado, Gotham, Hamptons, Los Angeles Confidential, Boston Common, Capitol File, and FoodArts in the USA as well as THEME and World's Best Bars in the UK.

Then they developed and delivered the education and competition programmes for the Havana Club Grand Prix between 2012 and 2019, not including rum education seminars through the UK and Europe on Caribbean rums. Miller and Brown were also part of the English Gin Road Show which launched the revival of the English Gin category in the USA, UK, and Europe between 2008 and 2010.

These two former bartenders also practice what they preach.

Brown is the co-founder and Master Distiller for the multi-award winning Sipsmith Distillery , the first newly-licensed, pot-still distillery to open in London in over 180 years, which won the prestigious 2010 Observer Food Monthly Best Newcomer Award and a 2011 Gold Medal from the International Wine & Spirits Competition.

Miller contributed to the development of Havana Club Union—the first super-premium rum designed to be savoured with Cuban cigars—and developed along with Nick Blacknell—Pacto Navio, ​a rum targeted  for the French market, combining the French heritage in Cuban rum development by ageing Cuban rum in French sauterne casks.

Together Brown and Miller have amassed a collection of international awards for their work as distillery consultants creating new spirits, including a 2002 international "Best Spirit" in the white spirits category from the Beverage Testing Institute for Heavy Water Vodka. They have worked as tasters and consultants for a number of products including Beefeater 24, No. 3 Gin, and Penny Blue Rum.

Miller and Brown were co-founders of the Museum of the American Cocktail with Dale and Jill DeGroff. They were the curators of a three-year project in the south of France, restoring Exposition Universelle des Vins et Spiritueux, a museum of wines and spirits founded in 1958, and cataloguing the 8000+ bottles, 1200 menus, and other antiquities in the collection.

They are currently curating a free, online, digital library of vintage cocktail, drink, and distillation books dating back to the 1750s at www.euvslibrary.com 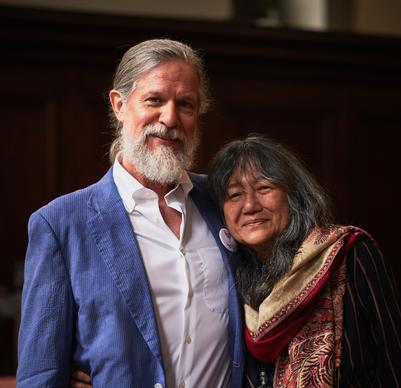